As our society changes as the years go by, wedding traditions tend to change alongside these culture shifts. One of the many big changes I’ve seen with weddings over the years is that nowadays the bride and groom tend to be the last people left standing, rather than making their big exit early on in the evening as they used to. I think this is a positive change, especially from an entertainer’s point of view. I always find that on the odd occasion when the bride and groom do leave early, the party doesn’t really carry on in full swing after they’ve left, and a lot of people tend to leave straight afterwards. 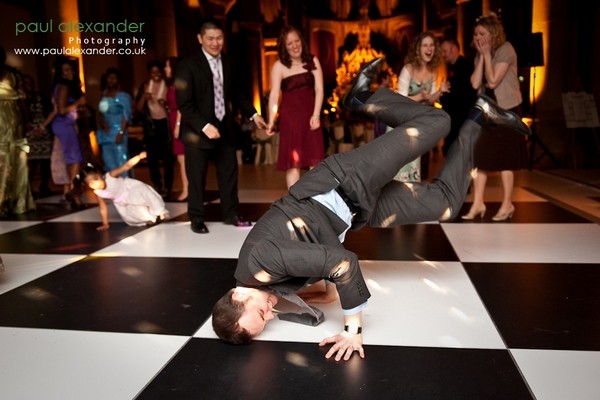 Planning for a Late Night

So, how do you keep your party going into the small hours? If you and your friends are big partiers and will want to keep on going (in the words of Lionel Richie) “All Night Long”, here are a few tips…

Make Arrangements for Your Wedding Band to Stay Late

If you’re hiring a band, generally they will perform until midnight or maybe 1am, but many will stay later for a small extra fee. So, if you do want them to play later, you’ll probably need to arrange this with them beforehand.

A lot of venues have a music cut off time of anything between 11.30pm and 1am, so make sure you discuss times with them. They can be very strict on this as sadly they get in all sorts of trouble if they break the rules.

Think About Your Choice of Venue

If you’re keen to have your music going all night it might be better to think about a private venue, such as a marquee in a friend or family member’s garden. This will give you complete control over what time things finish… but don’t forget to invite the neighbours!

Give Your Reception a Cool ‘Ibiza Style’ Club Vibe!

I’ve seen weddings that have a ‘club’ part of the marquee which opens later in the evening – what a cool idea! You could have a house/dance style DJ, or perhaps even a saxophonist and percussionist improvising to the DJ.

Ceildh Bands often play earlier in the evening too, but there’s nothing better than finishing your evening with a few Irish jigs!

I keep talking about this in my articles, but I just think it’s a great, fun idea! A lot of karaoke bands will perform standard (non karaoke) sets too, so perhaps they could play throughout the evening and then do a wedding karaoke set later in the evening.

Silent raves are no longer reserved for University parties; you can hire one for your wedding! This is a great option, especially when your venue has a strict finishing time for live music. If you haven’t seen one before, a silent rave is where every guest has a headphone set which the music plays through. I believe you can also get some where you can switch channels to hear cheese/house/pop/funk etc, so each guest can decide what they want to hear and have their own little party – what a fun idea!

Using an iPod is the most cost-effective option by far, and actually later on in the evening it’s quite often just right. It won’t be too loud, and the hardcore partiers will have some music to sing along/dance to.

Hopefully you’ll find these ideas useful, and best of luck with all the plans.