Getting to Know – Solent Forts

Location: In The Solent, off Portsmouth, Hampshire

Please tell us a little about Solent Forts’ history

When Louis Napoleon, the nephew of Bonaparte, seized power in 1848 and declared himself Emperor Napoleon III there was widespread fear in Britain of a resumption of hostilities with France and a possible invasion. In 1860, after much debate and deliberation, the government of Lord Palmerston proposed the construction of a ring of Forts in the Solent to protect Britain’s premier naval dockyard.

Spitbank Fort was completed in June 1878. The two outer Forts, Horse Sand Fort and No Man’s Fort, although started earlier, were completed in the spring of 1880. Horse Sands Fort and No Man’s Fort are identical, being 200 ft. in diameter and fully armour plated, while Spitbank Fort was only 150 ft. diameter and had iron plating on the seaward side only. 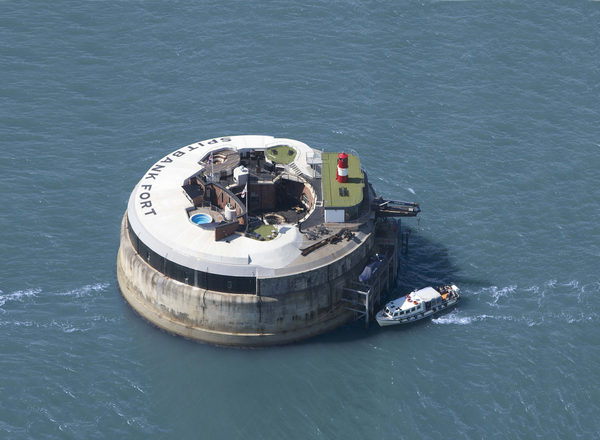 The stones, beautifully cut and weighing several tonnes apiece, had to be positioned on the seabed by divers who worked without the benefit of today’s technology. Each includes an artesian well to provide the garrison with fresh water – these are over 400ft deep! The cost was extortionate: excluding armaments, Spitbank Fort cost £167,300 (£8.6m in today’s money), Horse Sand Fort cost £424,694 (£31m in today’s money) and No Man’s Land Fort £462,500 (£34m in today’s money). By the time they were completed the invasion threat had receded and the Forts were dubbed “Palmerston’s Follies”.

They were heavily armed, none the less, with the guns being regularly upgraded as technology advanced. By the start of the First World War Spitbank was equipped with roof mounted guns that could prevent light forces from penetrating the Spithead area and the entrance to Portsmouth Harbour. Between the wars, all Forts in the Solent were left largely neglected until 1940 when the fall of France meant an invasion by German forces became a real threat. Spitbank Fort, along with Horse Sand and No Man’s Fort, suffered considerable damage as a result of German bombing. They were not able to support heavy anti-aircraft guns for general air defence but were brought to war-readiness for the seizure of French warships anchored off Portsmouth in 1940, after the fall of France. This was the only time that their armament was trained on the targets for which they had been originally built. The seizure was completed with little opposition and actual firing from the guns on the Forts was not necessary.

The Forts were de-activated at the end of the war and decommissioned in 1956, but only sold by the Ministry of Defence in 1982. Since then Spitbank Fort has been privately owned and has gone through many guises before finally coming to rest in the creatively sympathetic hands of AmaZing Venues. We have lovingly transformed Spitbank Fort and No Man’s Fort into unique, luxury wedding venues like no other, and will shortly complete the restoration of Horse Sand Fort.

What type of venue is Solent Forts?

Our three amazing historic sea forts have been, or are in the process of being, transformed into the ultimate private island experience. Perfect for Private Parties, Fort Breaks, Weddings and Lunch Experiences, our venues offer something unique. 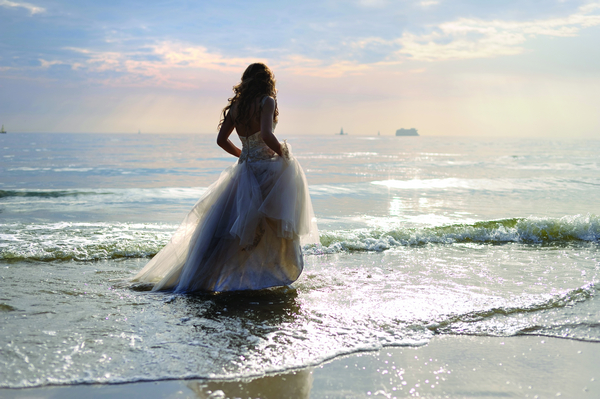 Three rooms on Spitbank Fort are licensed for civil weddings – you can say “I do” in the Officer’s Mess, the Victory Bar or the Crow’s Nest.

No Man’s Fort offers a variety of different spaces for your ceremony and reception, from the huge central Atrium to the Dining Quarters and the Rooftop Deck to the Cabaret Club, each with their own unique characteristics. 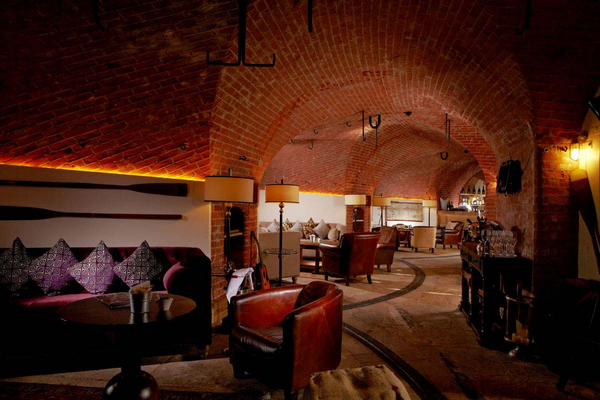 What can a couple expect from having their wedding at Solent Forts?

Where could be more amazing, romantic and unusual for your wedding ceremony and celebrations than Britain’s very first luxury island?

You and your party can assemble in the Departure Lounge then we’ll ferry everyone out in our flotilla of boats.

As far as the celebrations go you are spoilt for choice with three bars and three dining rooms exclusively for you and your party, as well as sun decks, hot tub, sauna, fire pit and games room. You’ll have you own chef to provide food and drink fit for an admiral of the fleet, supported by a full crew to offer a superb, personal service.

Once you finally run out of steam and need to turn in for the night there are nine wonderful bedroom suites in which to moor up for the night. 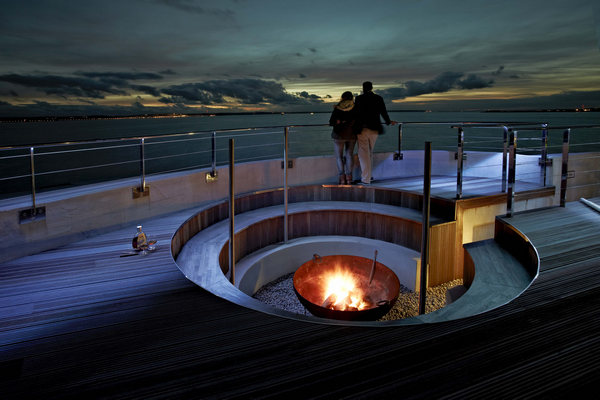 What is the capacity for a wedding ceremony and reception at Solent Forts?

Do you offer exclusive use?

Yes, and completely surrounded by waves, only accessible by boat, shrouded in mystery, immersed in history, and with the kind of facilities even a rock star or celebrity would get excited about, this party venue blows everywhere else out of the water. 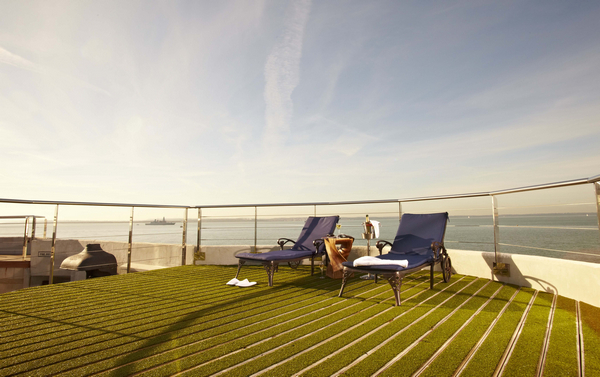 Does Solent Forts have its own caterers or can couples choose to bring in their own caterers?

Get your crew together for a dining experience extraordinaire. The unique setting and fabulous facilities make any event at Spitbank Fort truly remarkable – but the dining experience is no less extraordinary. From the moment you arrive it’s all hands on deck as our General Manager, Head Chef and Crew create a series of gastronomic treats that few restaurants on the mainland can match. 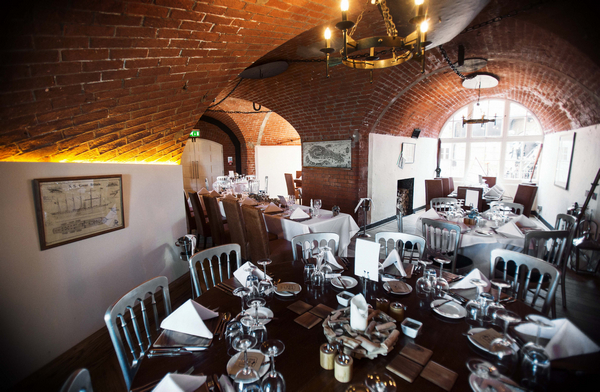 What types of packages are available at Solent Forts?

With wedding packages to suit all budgets please call us to discuss your wedding proposal or visit our website. 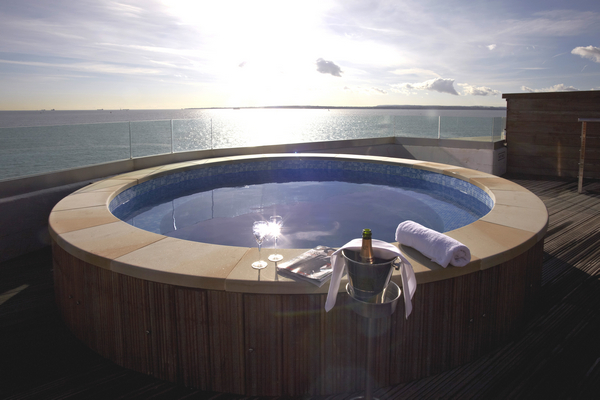 Please tell us a little about Solent Forts’ guest rooms

There’s something incredibly romantic about being at sea after nightfall – the moonlight on the water, the sighing of the wind and the lapping of the waves.

Each of the eight bedrooms on Spitbank Fort, and the ninth up in the Crow’s Nest, have captured this wonderful sense of a life on the ocean. Eight of the gun emplacements have been turned into spacious en-suite bedrooms – each has bags of character, with the original exposed brickwork and iron ceilings studded with rivets adding an authentic historical atmosphere.

No Man’s Fort has been delicately transformed into an incredible setting for your wedding day, and after a long day of laughter or an evening of partying, there’s nowhere better to unwind than in one of the Fort’s well appointed 22 bedroom suites. 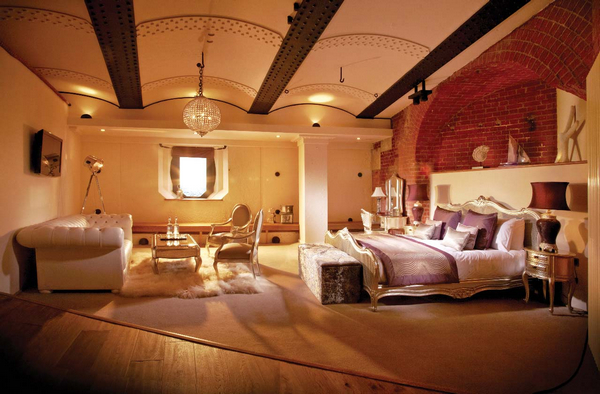 Does Solent Forts have a wedding co-ordinator on site and are they available on the day of the wedding?

It depends on the package your choose, but we do have a personal Wedding Manager who will be there to assist your with every last detail, and a toastmaster for the day.

Where can I find out more about Solent Forts?