And the winner is… Andy Fountain Photography! 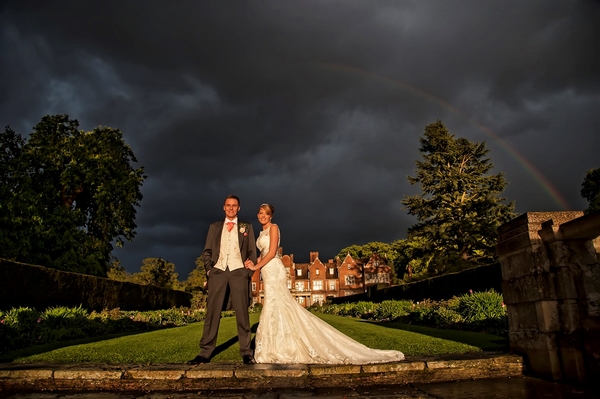 This stunning picture by Andy Fountain Photography received the most votes in our April 2014 Picture of the Day competition to become the fourth finalist for our Picture of the Year vote in January. Andy told us how he had to seize the moment to capture this great shot…

“When Laura and Dan first approached me to shoot their wedding I was so excited as they were such a cool couple, then when they said they were getting married at the beautiful Longstowe Hall in Cambridgeshire I knew it was going to be a fantastic day, and one to remember for years to come.

“Laura and Dan planned their big day to perfection, from the stunning venue to the gorgeous wedding dress, but one thing they could not plan for was the weather! This was the wettest wedding I have ever shot, and we spent the whole day darting in and out to get the images we wanted whilst keeping the day flowing and the guests happy. With all of our weddings we try to create a bit of a wow factor and set up some studio lights outside to capture a spectacular image of the coupel as the sun is setting. Every couple we work with is aware that at any time, when that light is perfect, they could get the nod and we have a matter of minutes to get that wow factor image. Unfortunately, with such heavy thunderstorms there was no way we could set up the lights or even take the couple outside, until something happened that shocked us all.

“Laura and Dan were in the marquee having coffee after their wedding breakfast, when Dan saw the change in the weather. He raced outside to be met by myself as I had also noticed the stunning light and knew that now was the moment. An excited groom convinced his bride that they had to go outside now, and as we ran through Longstowe’s grounds the sun burst through the storm clouds and bathed the Hall in light. We set Laura and Dan up in a more stylised pose compared to the natural ones we had shot earlier in the day and, as I was shooting, the most beautiful rainbow appeared over the couple. I couldn’t have dreamt this scenario; it look prefect and made this a day to remember.

“Everyone that views the image asks if it is Photoshop, because surely you can’t have such amazing light, a black stormy sky and a rainbow all together. But there’s no Photoshop involved, and I suspect that I’ll never shoot a shot as spectacular as this for a long long time – a perfect day.”